We live in an extremely visual society where many impressions are made on first glances of our faces.  Among the most prominent and immediately distinctive feature on our faces is our nose.  Hence, much has been made about what an ideal nose should look like.  The idea of a perfect nose exists but is age, gender and culturally specific.  A woman’s ‘ideal’ nose has generally been defined as one with a bridge that is high, straight and narrow with a turned up tip whereas a man’s nose should ideally project confidence, balanced with the chin and profile.  The truth is, the ideal nose differs for each person but the idea of harmony with the rest of the face is most important i.e.  the nose should flow gracefully with pleasing lines and contours.  In general, a higher nose bridge does create the illusion of a slimmer face and enhances other facial features.

Most of us are satisfied with our existing noses.  However, some of us continue to strive to correct certain deficiencies as we view them, to achieve the look that we’ve always desired.  Rhinoplasty was amongst the first aesthetic surgeries performed and continues to be popular.  Nonetheless, we now live in a time where there are effective, safer and less invasive options to nose augmentation with less downtime.  The two most popular methods on the market currently are: nose fillers and Korean nose threadlifts.

This article serves to explain the two procedures, how they differ and hopefully, help you decide which is more suitable for you.

This is typically a hyaluronic acid injection which when done appropriately can augment the nose bridge effectively.

This is done under a local anaesthetic and takes about 15 minutes.  The results are immediately visible i.e. a higher nose bridge.  It continues to improve over 1-2 weeks after which a review with your doctor will be arranged.

A nose filler injection is typically safe other than the initial redness and mild discomfort at the injection site.  This normally resolves quickly and you can resume daily activities almost immediately.  Occasionally bruising may ensue but this is also temporary.  Certain complications have been associated with nose filler injections and these include infection and vascular complications.  This is exceedingly rare and will be discussed with you again prior to the procedure.

How long does it last:

A nose filler typically lasts for about 1-2 years after which the nose contour typically reverts back to its original appearance.  The injection can then be repeated.

Korean nose threadlift, when used alone or in combination with nose filler, is able to lift your nose bridge and nose tip, making your nose look sharper and higher.

Our Korean nose threadlift utilises advanced PDO (polydioxanone) 3-dimensionally barbed threads which are placed under the skin to improve the contour of the nose i.e. elevate the nose bridge and/or tip.  They also stimulate collagen formation to lift and support the desired contour.

This treatment is done under local anaesthesia and requires about 15-30 minutes.  The number of threads required will be determined by the attending doctor based on the existing shape of the nose.  The results are immediately visible and trained doctors and staff will also advise you accordingly about the post-treatment dos and don’ts.

The Korean nose threadlift is a procedure with a very good safety profile.  The procedure itself is done under strict sterile conditions to minimise any risk of infection.  The placement of the threads is normally done in such a way that no scars will be visible.  As with fillers, some discomfort, redness and bruising may occur immediately after the procedure but this is temporary.  Korean threadlifts, however, are not associated with any of the previously mentioned vascular complications that can rarely occur with fillers.

How long does it last?

The embedded threads normally completely dissolves after about 6 months but the collagen that forms during that time will help to support the new shape of the nose for a much longer period.  Therefore, Korean nose threadlift normally lasts for 1 to 1.5 years. 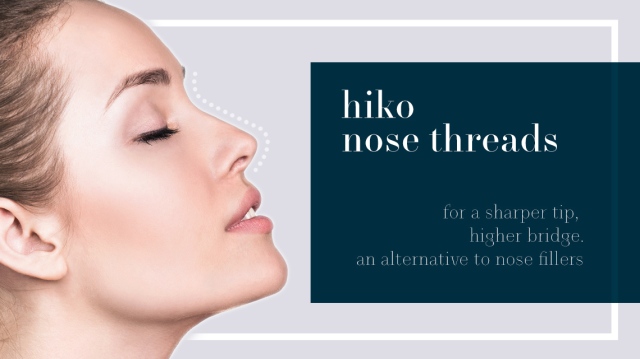 Should I get a filler or a threadlift

To highlight some of the similarities and differences between nose filler injection and Korean nose threadlift:

In actual fact, nose fillers and threadlifts need not necessarily be done in isolation.  The effects can be combined to give a more dramatic, longer lasting result.  Consult an experienced physician who will be more than happy to advise you further on how you can attain the nose contour that you’ve always wanted.